Details
Written by Friends of Ecusta Trail
Created: 05 May 2021

Click on this link to listen! Hendersonville NC Tourism Speaks with Chris Burns

Many adjacent landowners along the rail corridor have notified us that the law firm of Lewis Rice has sent them a package offering to represent them in an Adverse Conversion law suit.  Both the letter in the package and the firm's website state that this law suit will only be brought against the Federal Government to reimburse landowners whose land has been granted as right-of-way to the railroad.  They state that it is not their intention to stop the rail banking process nor to keep a rail-trail from being developed along the corridor.  They also state that they will not bring other entities as parties to the law suit.

This link to the FAQ's on their website gives more information about their intentions.

Ecusta Trail Touted As a Recruitment Opportunity For Economic Development

The Henderson County Partnership For Economic Development recently worked with Creative Economic Development Consulting to update their Industrial recruitment strategy.  As a part of the process, the  SWOT analysis ranked the Ecusta Trail highly as an opportunity for economic development.

Businesses Say "Yes, In My Backyard"

When he was asked if he’d heard that the state had awarded a grant for the proposed Ecusta Trail, Zach Pickett affirmed that he had indeed.

“The owner of the building sent me a text — ‘woohoo!’” Pickett said. “It’s going to hopefully bring in a lot more traffic around here.”

Ecusta Trail is the Next Big Economy Booster 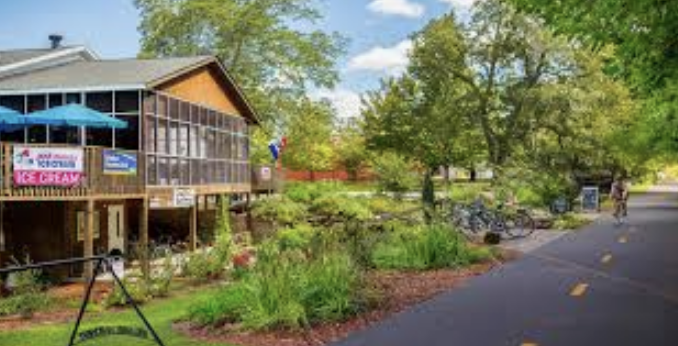 A $6.4 million grant to help acquire the Hendersonville-to-Brevard rail line for the Ecusta Trail is the best economic development news in a long time.

Eight years ago, we got the news that Henderson County had won the industrial recruiting sweepstakes when Sierra Nevada Brewing Co. announced that it was locating its East Coast plant in Mills River. We knew the nation’s second largest craft beer maker would produce the suds. We had no idea just how big a generator it would be of tourism dollars. The Ecusta Trail is similar to that, even if it won’t create as many direct jobs.