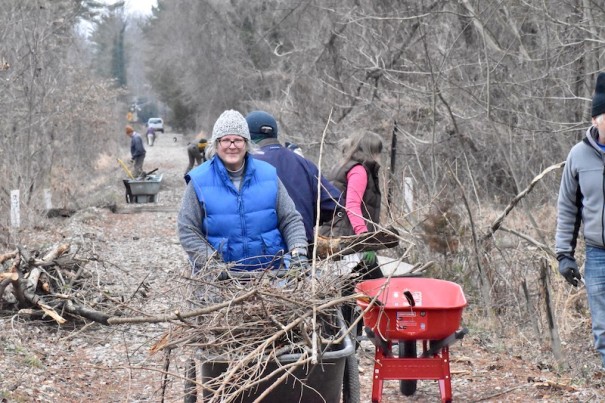 Volunteers who came out Saturday for the first-ever Ecusta Trail work day expressed a common refrain when they described what inspired them to give their time. Whatever they can do to speed up the trail’s opening, they said, they will.

Patty O’Brien, who was tossing debris onto a pile and picking up scrap metal and railroad tie pieces, came out with her husband “because I can’t wait to use it," she said. "We’ve been waiting for seven years since we moved here for this to get started.” A bicyclist who is also “trying to be a runner,” O’Brien said she’s “thrilled to the core” that the trail is en route to reality.

The O’Briens were among 50 volunteers who raised their hands to join the work day, which cleaned up the first two miles of the trail, from Kanuga Road at Busy Bend to Daniel Drive in Laurel Park. So many people volunteered, in fact, that organizers ended up with a waiting list of 20 people who were not needed this time. Other organizations have contacted Henderson County, Conserving Carolina or the Friends of Ecusta Trail to inquire about doing a work day, including the Henderson County Board of Realtors, Vision Henderson County, civic clubs and others.

Pediatrician James Horwitz and his wife, Deanna, were among the husband-and-wife teams who joined a crew on a cool overcast Saturday afternoon one day before the big snow storm covered the ground.
Deanna, who was pushing a wheelbarrow of debris across a small trestle, was eager to come out “because I want to see this get going,” she said. “I want it to happen now. It can’t happen fast enough.”

Dr. Horwitz described the work as “making the dream.”

“I run and my wife likes to ride her e-bike,” he said. “We’re real excited about riding back and forth to Brevard. We’ve waited 20 years for this.”

“I’m super excited,” said John Wilkerson, who retired from the military and more recently as the ranger at the Park at Flat Rock. “I really want to try to do some of the rail trails all over the country. I rode in my 20s and I just bought a mountain bike.” Because he doesn’t ride on the road, he looks forward to the rail-trail here. “I’m thinking about buying a gravel bike for something in-between.”

Paul Benson agreed to lead the work crew that covered the cleanup from Third to Fifth avenues. He looks forward to adding the Ecusta Trail to his log of rail-to-trails he’s ridden.

“I’ve been really interested in this project ever since I first started hearing about it 20 years ago,” he said. “It’s kind of exciting. This is the first day where work is being done by volunteers. I bike. I like rail-trails. I like the Swamp Rabbit, Isothermal and the Creeper. I look forward to when this is open.”